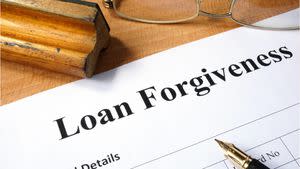 While millions of federal student loan borrowers are now eligible for loan forgiveness, not everyone currently repaying those loans will get the relief.

About two million Americans are repaying private student loans, which are not included in the federal debt relief plan.

Private loans account for about 8% of student debt nationwide. Borrowers who refinanced their loans with private companies to get a lower interest rate are also excluded from the president’s debt relief plan.

“We’re definitely in an uphill battle there,” said Matt Royer of the Young Democrats of America. “There are a lot of hoops to jump through when it comes to private industry.”

Royer says President Biden’s plan is a good first step in helping borrowers who are struggling to repay debt. He thinks the government should do more to crack down on skyrocketing costs charged by colleges, as well as interest rates and fees from private student lenders.

“I think we have a precedent for private industry regulation one way or another, so that’s definitely something we need to work on,” Royer said.

Not everyone agreed with the federal government forgiving student loan balances. Small business owner Bryan Lonsberry says it’s not fair to others who have already paid off their debt.

“It’s kind of upsetting that we kept paying and struggled to get it all done, and then other people just gave up and quit,” Lonsberry said.

More than a decade ago, they passed legislation strengthening consumer protection and disclosure. However, so far there is no federal legislation regarding private student loans.